In this series of posts, I hope to show Then and Now images Oakland Schools.  Along with a bit of history of each school, I highlight. Some of the photos are in the form of drawings or postcards, or from the pages of history books.

Note: Piecing together the history of some of the older schools is sometimes tricky. I do this all at home and online — a work in progress for some. I have been updating my posts when I find something new. Let me know of any mistakes or additions.

Campbell’s daughter Mary was the principal of the school from 1898-1926.

In 1907 a new school was built. The Mission Style school was designed by Architect F.E. Voorhees and cost $38,000. It had seven classrooms and offices for the principal. 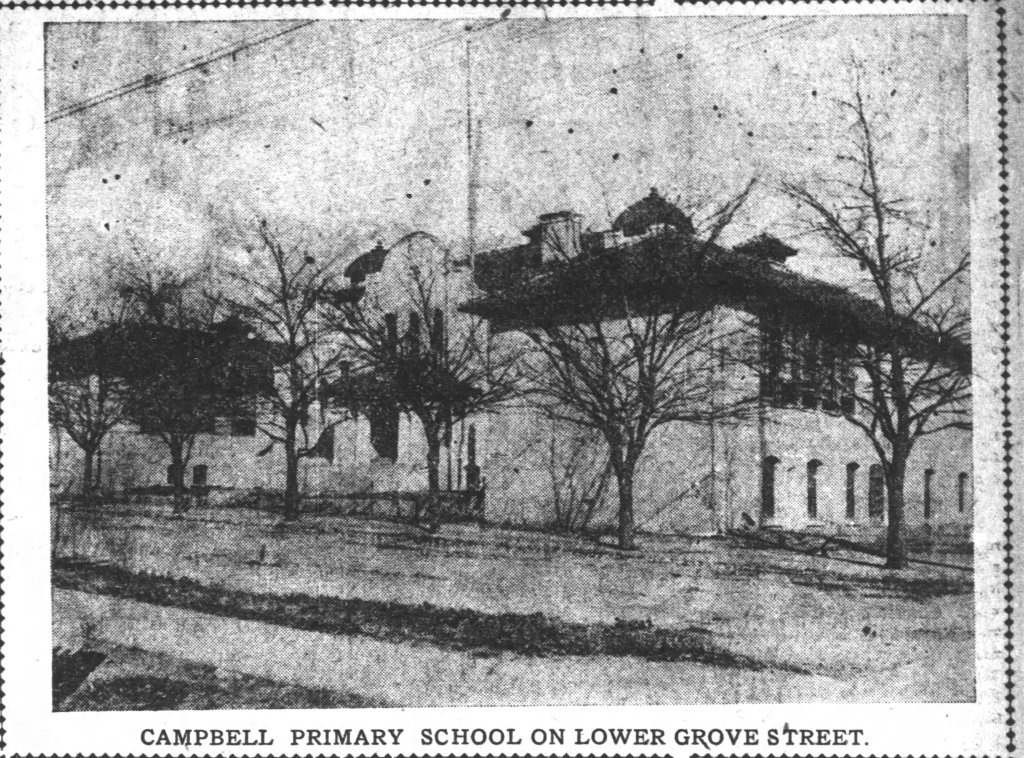 In 1954 due to the school not being earthquake-safe, it was closed, and the students were sent to Tompkins School. The school was sold and demolished in 1954. A commercial building was built on the site.

The school was located at 416 Grove Street.

In 1912 the first drawing for a new Peralta Heights school was submitted to the school board. John J. Donovan and Shafer & Wilde were the architects.    Donovan designed many schools for the district.

Peralta Heights is a small neighborhood in what is now known as Cleveland Heights.

Bids to build the school were submitted in 1912, based on the below photo. They held a formal opening of the school in Jan of 1914.

The old school building was still standing in 1973 and was finally replaced with a new building in 1977.

Cole Grammar School was opened in 1885 in West Oakland on 10th Street between Union and Poplar Streets.

It was named for Rector E. Cole, an early Oakland dentist and member of the city council, and member and then president of the Oakland Board of Education.

As of 2013, Cole School is the headquarters of the Chief of Police.

The Piedmont Avenue School, as seen below, was built in 1891.

Before that, there was a two-room schoolhouse up closer to the Mountain View Cemetery. Classes we held for a time at the home of G.W. Hume, who lived in a large estate where the school is located now.

The school at that time was used by both children from Piedmont and Oakland. The building was designed by William Kirk and cost about $10,000 to build. The school had a bell tower with a 350-pound bell. There was a large assembly room, a library, a hothouse for plants, classrooms on both floors, and a large lighted basement where the children could play during wet weather.

The school was dedicated on Washington’s Birthday in 1892.

In July of 1938, while the students were on summer break, the school was destroyed by a fire that was considered arson. Ten firemen were injured four of them seriously.

The new school was dedicated in March of 1941 with funds provided by “The Living New Deal” Works Progress Administration (WPA).

This Art Deco school building is complete with auditorium, library, kindergarten classroom, kitchen, offices, and regular classrooms. There is still a WPA sidewalk marker in front of the school.

Prescott School started in 1866 as a one-room primary school. It was located at Ninth and Campbell Streets, which was dirt roads surrounded by woods.

In 1869 a new two-story building with four classrooms on each floor opened the largest, and it was the most up to date school in Oakland.

Prescott Primary school was constructed in a record time of 187 workdays by Lawton & Vezey, a local contractor.

The new school was a two-story Spanish style steel-framed building with a basement and seventeen classrooms.

accepted by the school board, who considered it one of the best in the recent school buildings”

Ida Louise Jackson, Oakland’s first African-American teacher, taught there starting in 1925 — 13 years before any other school hired a black teacher.

In 1954 Prescott Junior High (somewhere in time it was changed?) was condemned for being dangerous and a hazard to the students. At that time, there was no money in the budget to replaced it.

Prescott is located at 920 Campbell St.

The school has been operating under the name PLACE @ Prescott (Preparatory Literary Academy of Cultural Excellence @ Prescott) since 2006, serving Kindergarten through 5th-grade children

Woodrow Wilson Junior High started out as Mosswood Junior High in August of 1923. It was located at the corner of 48th and Webster Streets. In 1924 the school’s name was changed.

In 1926 they laid the cornerstone for a new school.

In the early 1970s, Woodrow Wilson Junior High School was demolished, and a new school was built.  Sometime in the mid-1970s, the school was renamed the Verdese Carter Middle School.

In 2007 the Oakland Unified school district opened its first school that enrolls only immigrant students. Called the Oakland International High School, it is modeled after international high schools in New York City for newcomers to the United States. The school was still open in 2019.

The school is located at 4521 Webster St.

A few of the illustrations from the 1885 Oakland and Surrounding compared to modern-day or an earlier date.

The Nichol Block was built in 1878 and is now a part of “Old Oakland.” It is located at the northeast corner of 9th Street and Washington.

Under the direction of James White, the leader of the Seventh Day Adventists, the Pacific Press building was erected in 1875 as a publishing and printing firm. It was destroyed by fire in 1977, arson was suspected. The building was in the way of the Grove -Shafter Freeway (980).

scaring the living crap out of Ted Nugent, Sean Hannity and Joe Farah for 1/14th of a century