Delilah Beasley was a columnist for the Oakland Tribune and was the first African American woman to be published regularly in a major U.S. newspaper.

She is most known for her book “The Negro Trail-Blazers of California,” published in 1919 and reprinted in 1968.

Delilah Leontium Beasley was born Cincinnati, Ohio, just after the Civil War on September 9, 1871 (some report 1867) to Daniel Beasley, an engineer, and Margaret Harris.

Beasley began her newspaper career in 1887, writing for the black newspaper, the Cleveland Gazette on church and social activities.

After her parents’ death, she went to Chicago and took a position to learn massage: she desired to become a nurse, which she became a few years later.

She traveled to California to nurse a former patient and stayed.

After moving to Oakland in 1910 at the age of 39, she wrote for the Oakland Sunshine and the Western Outlook.

To help her race; to open doors into the arts and sciences for the negro boys and girls, has been the impelling force for Delilah Beasley”

Beasley spent the first nine years in Oakland researching Black Americans’ history in the west at the University of California at Berkeley. She also would give presentations at local churches.

Her book paved the way for Beasley to become the first African American women in California to write regularly for a major metropolitan newspaper. She worked for the Oakland Tribune from 1923 to 1934 and wrote a weekly column entitled “Activities Among Negroes.”  The column carried civic and religious news of the black community

Beasley was determined to advance the rights of African Americans and women; she joined many civic clubs. These included the NAACP, the Alameda County League of Women Voters, the National Association of Colored Women, the Oakland Council of Church Women, and the Linden Center Young Women’s Christian Association.

She was an honorary member of the League of Nations Association of Northern California. 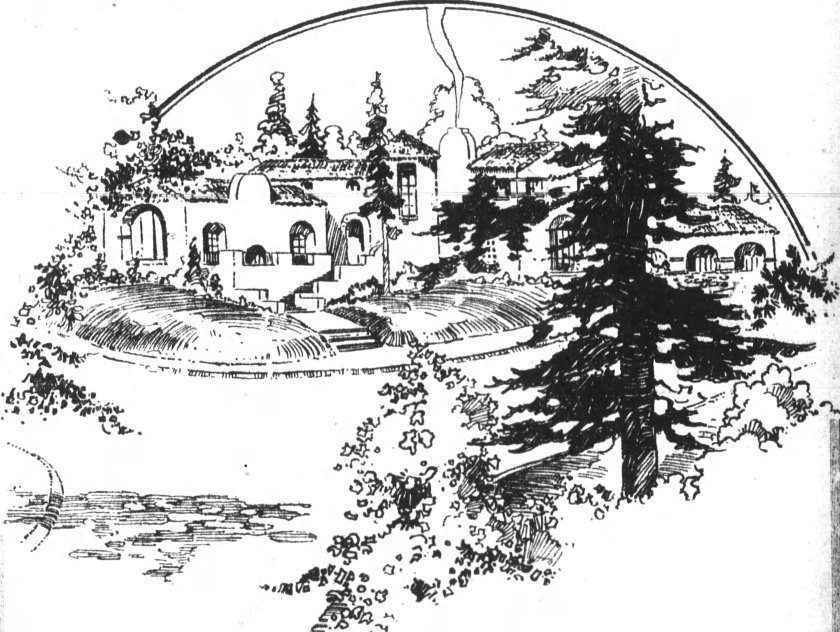 Palatial Home to be Built

In July of 1928, a palatial residence was to be built in the new subdivision Claremont Pines developed by York Company Inc. The home was known as the Tribune-Schlesinger Home.

The Spanish-Mediterranean style home was sponsored by the Oakland Tribune and was furnished by B.F. Schlesinger and Sons.

The house was designed by Frederick H. Reimers, an Oakland architect, and was constructed by C. Dudley de Velbiss, a well-known builder.

Each phase of the construction was fully described in columns in the Oakland Tribune. During construction, the site was open to the public.

Great care was taken in the selection for the residence, which occupies a prominent corner overlooking the Claremont golf course and facing the Golden Gate.

“The Mediterranean type of architecture was selected to conform to the contour of the site and to the general rolling nature of the terrain.”

The house has sixteen rooms, each with an individual style. It has a ballroom, library and a smoking room.

The halls and library have floors of colored, hand-made tile, and doorways are arched.

It is further enhanced by a series of walled-in courts and terraces.

The landscaping was done under the supervision of Johannes Reimers a local landscaper and artist. He was also the Father of Frederick.

On August 09, 1928, the official groundbreaking was held in the presence of a large group of Eastbay notables.

Home is Near Completion

“Plastering is now ready to start.”

$55,000 was invested in the project exclusive of the furniture and furnishings.

“a haven of rest and peace from the busy world.”

The exterior brick fireplace and terrace brick walls leading to the entrance are the same color as the stucco.

Another feature was the concrete foundation installed by J.H Fitzmaurice, Inc., a local concrete contractor. The quality of the material used in the foundation is the very best at that time.

All bearing walls are twelve inches in thickness.

A rare harmony of late Renaissance furnishings promised to make the home of exceptional interest, under the guidance of A.L. Abrott of the B.F. Schlesinger & Sons.

The upper floors followed the lighter moods of the seventeenth century when Venice was still at the height of her glory.

The ballroom or social hall on the ground floor was decorated in the spirit of modern jazz and twentieth-century amusement.

Upon entering the vestibule, one is impressed by the tremendous Castillian effect of the entrance, and the monumental stairway—the curving staircase with artistic hand-wrought iron railing.

The main stairway leads to a secondary vestibule, which in turn gives access to four bedrooms.

Convenience was the new type of telephone installation by Pacific Bell. Each telephone placed to obtain the highest possible comfort and privacy for the users and blend in with the decor.

Two main lines were installed: one for the use of the family and the second primarily for the servants’ use.

A hand telephone with a key box was installed in the master bedroom. The keys could cut off the servant’s phone for privacy.

A wall telephone connected to the servants’ line was placed in the garage.

The formal opening was held on Sunday, December 30, 1928.  Lucile Webster Gleason of the Dufwin Theater, star in “The Shannons of Broadway,” formally opened the doors.

Ten thousand visitors viewed the home in the first week it was opened. Of this number, seven thousand attended the opening day.

I grew up in the Montclair District of Oakland, CA. I attended Thornhill Elementary School, Montera Junior High, Skyline High School, and spent some time at Merritt College.

I lived in Montclair until I was a young adult, and since then, I have lived by Lake Merritt, in the Fruitvale District, on Piedmont Ave, the King Estates Area, and now the Laurel District.

Since going on an Oakland Heritage Alliance Tour of the Fernwood Neighborhood in the Montclair District of Oakland in about 1984, I have been an Oakland history buff ever since. On that tour, I learned a train (Sacramento Northern) ran through Montclair in the early 1900s and that people lived the area as early as the 1860s — been hooked ever since. Since then, I have spent a lot of time looking into Montclair’s history, and I have learned a lot. I feel this will be the best way to get it out of my head and onto paper.

In 2018 I started this blog because I collected so much information on Oakland’s history and couldn’t wait to share. Posting in Facebook groups isn’t the best outlet for me. I love sharing what I know and reading what others share. But things get lost on Facebook.

With my dear friend Phil, I got started, and I was off and running. It should be easy, I say to myself, because, in my mind, I had already laid out actual pages and everything I wanted to say.

I tend to get bogged down in the details. I worry about getting my facts correct. It is hard for me to find a happy medium between too much and too little. So, this is a work in progress, so bear with me.

I hope you will enjoy history as much as I do!

Down The Hole, I Go

But I have strayed from the topic of this post. Often when researching one thing, you find something else that has nothing to do with what you are looking for, but it piques your interest. That happens to me a lot.

You might know this as the “Internet rabbit hole” you see when you try to research one thing, and then accidentally go to Wikipedia, and then you are trying to find out what happened to Jimmy Hoffa? That is it in a nutshell.

One rabbit hole I get sucked into often is I will see a picture like this one and want to know more about it.

I have compiled a lot of these pictures of newly built houses. I decided to create a map using Google Maps.  The map I have created is “What was there or still is… Oakland, California”.

I have already added lots of the homes that I have found while down in the rabbit hole.

What was there or still is… Oakland California

Description of the Map

Some from long ago and long gone, but some are still there.
Based on clippings, newspapers, and photos. May not be accurate as address numbers have changed, and locations were often vague

Here is a link to the map.  Click on it to see.  Please feel free to share it.

I still have lots of pages in the works; just have to get myself out of this hole.

A Bit of History